Don't be a beer collector 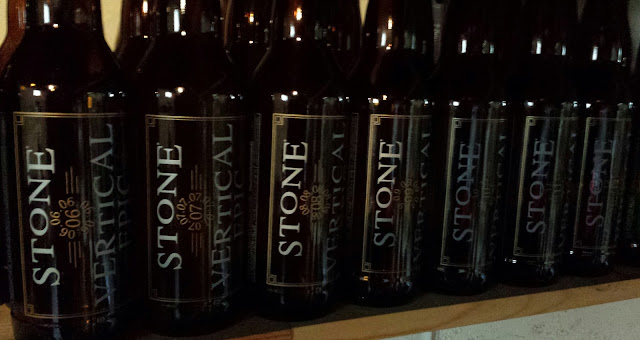 Three years was how long it took me to realize that I was collecting beers. Boxes in my basement (I'm not calling it a cellar) had started to fill up with unopened bottles of beer that I wasn't drinking. Back in 2006 I grabbed my 1st bottle of Stone's Vertical Epic series and despite missing the first few years I was determined to see it through to 2012. Seven years past and I had collected the set from 06.06.06 through 12.12.12. The next step was much harder than picking up a beer once a year. I had to find a time significant enough or group of people good enough to sample seven 22 oz beers in a sitting. This was supposed to be a vertical tasting. This was in the name. The Stone brewers/marketers would take away my Stone card (is there such a thing?) if I didn't.

Three years past and those 7 beers were still in a box in my basement. This had moved beyond wanting to plan something special and worthy of a project spanning nearly a decade. I was an Epic failure on the Epic party planning front. These beers needed to go! Needed to go into my belly! There's no way I'm taking on a solo vertical tasting of these beers. That would mean either dumping beer or trying to drink upwards of 2 1/2 gallons beer. I don't mind dumping a taster at a festival, but not a 22 and I'm surely not drinking to lethal BAC.

Starting up...An Epic 7 days
Over the next 7 nearly consecutive days I had one Epic beer a night, paired with an episode or 2 of Scandal, because just like beer I'm several years behind on TV. While originally I had plans of a grand vertical tasting with notes and comparisons of beer, I just sipped and enjoyed these beers.

Posted by BeerIntelligenceProject at 8:18 AM