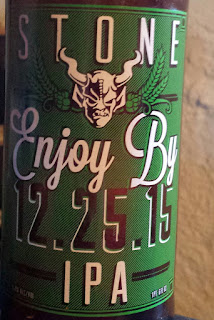 The perfect time to quantify my quaffing is at the end of one year and the beginning of a new. The year makes such an easy delineation for queries and aggregation. So I present to you data sets of new beers I've drank WHERE YEAR(beerDate) = 2015.


Best new brewery: pFriem Family Brewers (6)
pFriem is not a new brewery, getting started in 2012, but they started bottling in 2015 and I couldn't have been happier. Their beer is outstanding and now available in bottles a few blocks from my house.

Top 4 breweries: There was a tie at 5th place
Thanks to the Vertical Epic Series Stone solidly took 1st place.


I've only had one: 37
There were 37 breweries from which I only had 1 beer last year. Looking through this list it is hard to imagine that I only brought one home, but numbers don't lie (unless you make them). There are so many great breweries below and yet there are so many beers out there, I can't hope to drink them all. Well, I could, but that's not such a good idea.

Beer Styles: 33
Beer styles are fuzzy, but my somewhat educated guesses ended up with me having 33 different beer styles in 2015. From Belgian-Style Pale Strong Ale to British-Style Imperial Stout and from French & Belgian-Style Saison to German-Style Pilsener. Not surprising the India Pale Ale varieties (American, Imperial and Session) totaled up to 49% of my intake.